Abortion opponents must stand in each other’s shoes 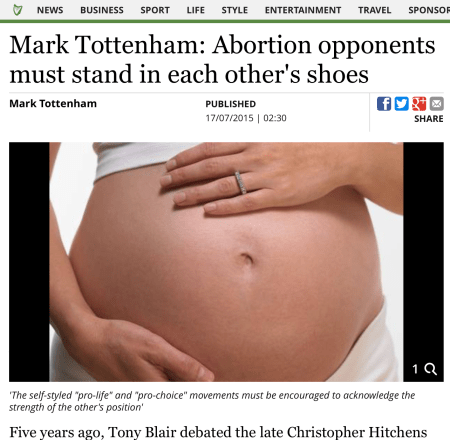 Five years ago, Tony Blair debated the late Christopher Hitchens in Toronto on the topic of whether religion was a force for good in the world. Towards the end of the debate, chairman Rudyard Griffiths asked: “A big part of this issue is our inability to stand in another’s shoes with an open mind to understand a different world view. In this regard, can each of you tell us which of your opponent’s arguments is the most convincing?”

Both participants acknowledged what a good question this was, and it prompted two of the more interesting answers of the evening. Tony Blair acknowledged Hitchens’s argument that the bad that was done in the name of religion was intrinsically bound up in religious scripture.

Christopher Hitchens conceded Blair’s point that, if religion ceased to exist, everything would not automatically be improved. In the modern media age, however, we increasingly find that the search for “good television” requires that only the extreme sides of a debate get heard.

This was evident during the recent referendum campaign on same-sex marriage, which seemed unnecessarily bitter at times.

This was partly because the adversarial format did not encourage either side to acknowledge the concerns of the other. If that was true of the same-sex marriage debate, one can only imagine what another abortion referendum would be like.

Television and radio stations, under their interpretations of the broadcasting rules, will line up predictable “pro-choice” and “pro-life” speakers to rehearse the tired arguments we have all heard so often, concerned only for giving each side the same number of minutes to promote their own arguments.

Those who do not comfortably identify with either side of the debate must look on while women’s lives are put at risk, and while thousands of women every year travel from Ireland to other countries to terminate their pregnancies.

In order to break this impasse, the self-styled “pro-life” and “pro-choice” movements must be encouraged to acknowledge the strength of the other’s position: a constructive middle ground has to be explored to find a legal position that each side can live with.

Campaigners on the “pro-life” side need to acknowledge that a blanket ban on abortion in Ireland does not prevent Irish women having abortions.

If a woman or girl is pregnant and does not want to have a child, she may take extreme measures to avoid having to do so, if she is not given other options.

More urgently, it seems clear that legal uncertainty is continuing to put women’s lives and health at risk.

The Protection of Life During Pregnancy Act 2013 has put in place procedures to protect a woman whose life is actually in danger.

But surely a woman should not have to wait until that critical point before taking the medically advised step of terminating her pregnancy.

Even if the foetus or unborn child does has a right to life, it is extraordinary to suggest that it should be equal to that of the mother who is bearing it, such that she should risk her life or health to continue the pregnancy in dangerous circumstances.

For many on the “pro-choice” side, it is rarely acknowledged that a foetus or unborn child has a life that is worthy of protection. It is not only religious extremists who are troubled by the notion of “abortion on demand”.

In most western countries, abortion is generally available until 12 weeks’ gestation. Yet, by nine weeks, the child has a functioning heart, brain, spinal column and nervous system, not to mention independently moving hands and feet. Should there not be some measures in place to protect the child if there are available alternatives to abortion?

Article 40.3.3, which essentially provides that an unborn child and its mother have an equal right to life, is not fit for the purpose of protecting unborn children or women.

It needs to be removed and replaced by a constitutional provision that provides for termination of pregnancy, albeit in restrictive circumstances, where the termination is necessary either for protection of the mother or where there is no prospect of the unborn child or foetus surviving outside the womb.

I would, therefore, suggest the following alternative wording, primarily for the purposes of advancing the debate towards a sensible compromise between “pro-choice” and “pro-life” positions:

“The Irish state places a special value upon the life of an unborn child and will only permit the termination of such life during gestation in such special and exceptional circumstances as may be prescribed by law, where:

b) the medical condition of the mother or of the unborn child are such that the said child would be incapable of life outside the womb.”

There may be no perfect middle ground between “pro-life” and “pro-choice” in the abortion debate. But I believe that each side must be encouraged to stand in the shoes of the other, to open their minds and to engage with the other’s world view.

The common aims must be to protect the life and health of the women of Ireland, and – if possible – to reduce the number of women who need to seek abortion within Ireland or abroad.